It’s been two months since our trip in Siem Reap, Cambodia.  A lot of things, good and bad, happened in that time-frame that I completely forgot about this post just sitting in my draft.  Oh well, better late than never…

I think one week is the minimum time you spend in Siem Reap.  Seven days give you plenty of time to rest and enjoy the sights without hurrying to the next stop.  This city has so many beautiful temples and ruins but you can’t see them all together in a day or two without getting “templed out.”

Below is the list of things we’ve seen and done in  a week there:

The old market of Siem Reap where one dollar can go a long way.

We arrived at the airport from Manila at around 11:30pm the previous night.   In the morning we immediately walked around the city and checked out the busy Old Market. This is where you can buy a lot of souvenirs, trinkets, shawls, bed sheets and whatnot.  It also has a wet market that can be either interesting or repulsive.  I’m not going to say why except that if you’re from the west, you should check it out.  I feel like this is the core of Cambodia’s every day life and it shouldn’t be missed out.

Haggling is important here.  Though I found everything in Siem Reap quite cheap, I know they raise up the price for each item you want to buy.  The biggest winner here was my husband. He couldn’t imagine haggling before but he did here like a pro– and he got everything he wanted according to the price he set.

During the day it looks like a lazy cousin of Brussel’s Rue de Bouchers.  I think it’s nice to experience it during the day first so you’ll see the wild change of it at night. There’s nothing much to do here during the day though, and just like Rue de Bouchers, I couldn’t imagine eating here.  Let’s just say it’s because I’m weird about puddles.

Arm yourself with lots of energy when you drop by at night.  Also, two words for you: ear muffs.  It can be really loud.  If someone has an explanation why it’s legal for people who can’t sing to have access to microphones at karaoke bars, please message me.

Kampong Phluk village. To see a world far removed from the hustle and bustle of city life is always a welcome experience for my husband and me.

Visiting the floating village of Kampong Phluk is one of the highlights of our week in Cambodia.  It was a completely different world, nothing I’ve seen before.

We went by tuktuk for 15 USD as it’s situated outside the city.  Aside from the tuktuk, there’s also a  20 dollar/pax entrance fee to the village.  Get ready for the roughest tuktuk ride of your life.  Turned out it was also the greatest surprise of my life as our boat captain couldn’t be more than 10 years old.  I was apprehensive at first if I could leave our life at the hands of a kid but he was so capable and sure of what he was doing that I finally relaxed halfway to the village.

Relaxing, addictive and so cheap.  In most Siem Reap hotels, a full body Khmer massage is only for 7 USD an hour.  I had one at Gloria Angkor Hotel.  It was one of the best massages I have ever experienced because it was right in our hotel room plus the masseuse used an oil that smelled like a fusion of frangipani and lavender.   I also tried their foot massage/ reflexology which eased my throbbing legs after biking about 20 kilometers from the city to the temple grounds and back. 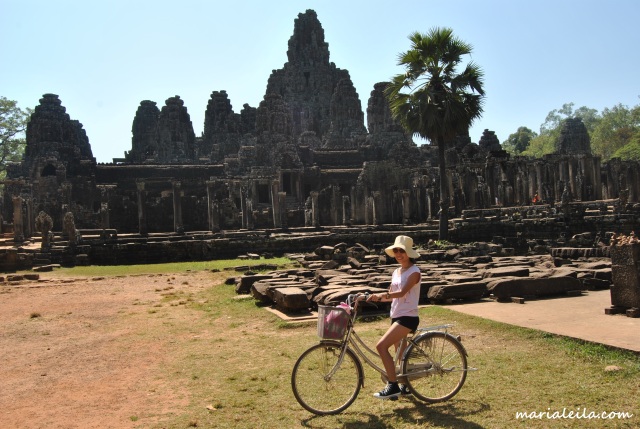 Biking under the blistering Cambodian sun with Bayon Temple to my right.

Most hotels provide bikes to their guests for free.  Biking around the temple grounds is a nice way to spend a day in Siem Reap.  When I say temple grounds, it means around the three most popular temples in Siem Reap:  Angkor Wat, Bayon and Ta Prohm.  Angkor Wat and Bayon in Angkor Thom are adjacent to each other while Ta Prohm is a little bit father  east.

I haven’t been on a bike for several years before this, much more in a big city where traffic rules are unheard of, so it was quite a strain both physically and mentally.  The end result? My temperature rose up that night both from the strenuous activity and being in the sun too long.

The moral lesson of the story is:  Exercise daily and don’t be a lazy grandma like me.

My favorite temples in Siem Reap in that order.  There is something mystical about Ta Prohm, how nature seems to be claiming its territory with those massive trees.  Their roots are stamped on every corner of the once glorious temple.  And it’s eerie, too, like those trees had eyes and they were staring at me.

Bayon Temple is within Angkor Thom.  It’s a temple with many massive and serene stone faces.  Before arriving in Siem Reap and just browsing the web for photos, I thought this temple would be my favorite, and it may have been if our visit wasn’t ruined by a bunch of ridiculously noisy Koreans.   I know not everyone can admire something in silence but talking and laughing at the top of your lungs in public is another story.  Someone please give them the handout on Manners or give them a crash course on Public Behavior.

Angkor Wat is, well, Angkor Wat.  We’ve read about it, we’ve seen the photos online and it is exactly what it’s been written or photographed before.  You need hours, if not a day, to explore it thoroughly.  Just be prepared for the crowd.  It’s very crowded from dawn till dusk.

The bamboo pavilion of Sojourn Villas where we learned to prepare a 3- course Khmer meal.

The best thing about Siem Reap is how customer service is at every corner.   “Ask and you shall receive,” seems to have been embedded in everyone’s mind.  I asked at the hotel if they could book a cooking lesson for me and et voila, they got me a spot to prepare a 3-course meal.  For 22 USD I was picked up by a tuktuk from the hotel and dropped off 20 minutes later to Sojourn Villas where the lesson took place in a bamboo pavilion.  The mission was to prepare for green mango salad as a starter,  Amok fish for the main course, and sweet sticky rice balls for dessert.  It was so much fun I would definitely do it again if ever I’d be back in Cambodia.

Another thing you can squeeze in your itinerary (and budget) is a buffet dinner at Angkor Modial Hotel.  It comes with a one-hour cultural dance performance.  We also booked this at the hotel which I think was for 20 USD per pax.  The buffet is great with varied choices but the dances were a bit meh.  I mean the dancers were doing an amazing job.  Just that after half an hour everything was the same or predictable.  If this was a movie, I’d blame it to bad writing.

Amok fish is one.  As suspicious as the name of this dish sounds, it’s actually very delicious. The fish is cooked in coconut milk with a lot of ground Asian spices thrown in. 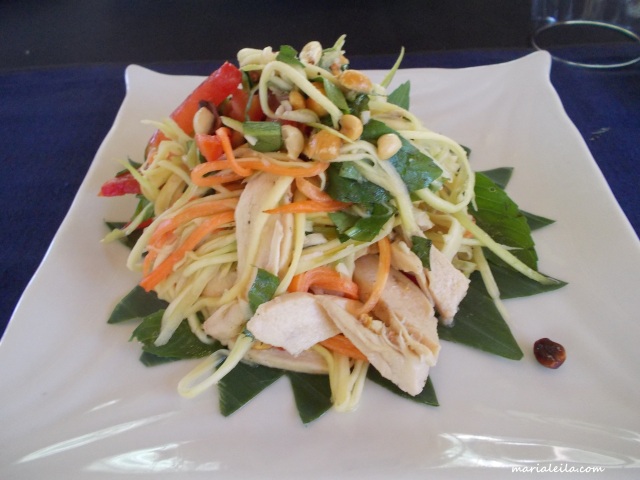 Presenting the green mango salad prepared by my dainty hands at the cooking lesson at Sojourn Villas. 🙂

Though I’m Asian and mango trees grew in our backyard, I’ve never really been a fan of green mangoes.  So this green mango salad they have in Siem Reap was  a nice surprise because it was so tasty, totally without the usual sourness of green mangoes.

Sweet potato chips.  So good we bought five big packs to take back to the Philippines.  We wanted to buy more but our luggage was already bursting to seams.

Deep-fried catfish with spicy garlic dip.  Yum!  They actually have a variety of deep fried fish and different kinds of dips to choose from.

We stayed at two different hotels.  First was at Angkor Pearl for four nights then at Gloria Angkor for three nights.  We wanted to be at the center of the action first then lie-low at the end of our stay so we picked these two hotels in that order.

Angkor Pearl Hotel is everything we have read on Tripadvisor.  We were hesitant at first to book an accommodation here because it was quite cheap, for only 25 USD per night for two with buffet breakfast.  Turns out it was one of the best accommodations we’ve ever had in all our travels together.  The (twin) beds were comfortable.  The room was very clean.  The people at the reception were very helpful, and breakfast was a delight.  If I had to find something to complain about, it’s something minor like my clothes coming back still a bit wet from the laundry service.  So yes, this hotel is highly recommended.

Gloria Angkor, however, finds my feelings in the mix.  For a double room they charged us 48 USD per night, also with a breakfast buffet.  The place is a bit father away from the center but the hotel provides  a free tuktuk service to and fro.

I felt like Gloria Angkor  wanted to pamper us but they didn’t really know how.  We also had a problem with communication.  Seemed like only the hotel manager and one person at the reception were good in speaking and understanding English and this is such a problem if you’re running a hotel full of foreign guests.  But I know they tried so all shortcomings were forgiven. 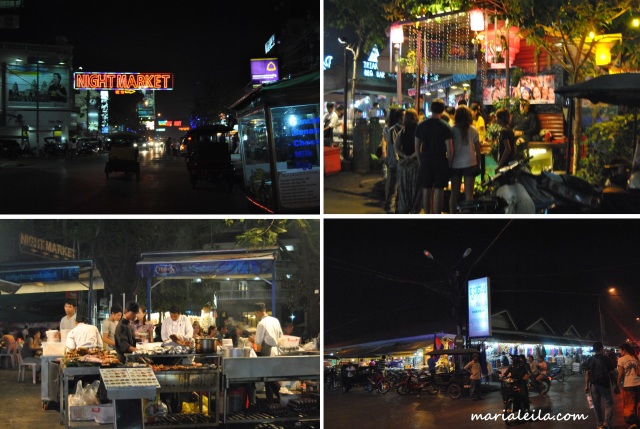 There’s really nothing much to see in the city center except Pub Street and the night market but it’s one of the cities I didn’t mind staying for a week.  I guess it’s because despite the influx of tourism, it has remained laid back.

I think the biggest assets of this city are not its temples but its people.  They are warm, helpful and honest to the bone.  Not in a single moment we felt cheated or ripped off.  In fact it was the opposite.  We felt they asked so less for what they gave.  And for this, Siem Reap will always be one of those places I think of with a smile.

This entry was posted in Cambodia, Travel and tagged Cambodia, siem reap, siem reap to do, travels. Bookmark the permalink.