This is quite a delayed post.  We were in Tuscany for almost two years already and I always procrastinated in writing about it.   I know memories are fragile and get fragmented through time so I’m finally penning it down now in hopes of keeping this wonderful experience fresh and alive.

I always knew one day I would travel  and as I kid I already knew which places I wanted to visit someday.  Tuscany had been consistent in my list.  For four days my husband and I were able to enjoy the sights and sounds, as well as the flavors of Tuscany, and we couldn’t wait to be back for more. 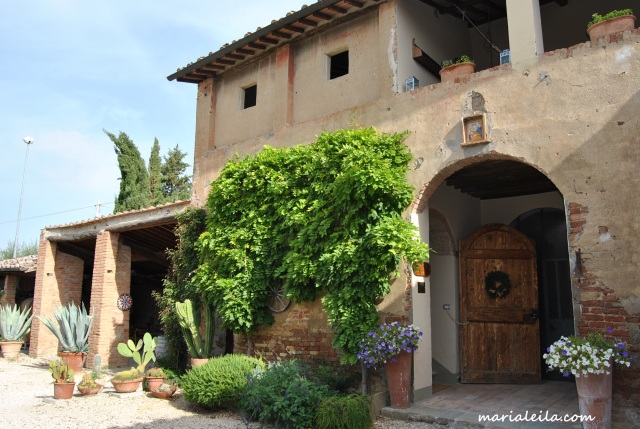 Agriturismo Marciano is a great place to stay in Siena. The nice reviews you can find on Tripadvisor about this B&B are all true.

We arrived around 2pm in the stifling heat.  We drove for about five hours from Udine so we only wanted to rest after finding our B&B. We were booked at Agriturismo Marciano.  I chose this bed and breakfast after reading lots of positive reviews about the place on Tripadvisor and it didn’t disappoint at all.   The only thing I will add is a reminder that it is really a bit far from the center,  about 40 minutes on foot.  My husband and I love to walk but in the blistering July heat it can be pretty exhausting.  Of course, this can be solved by driving and parking just outside the walled city and back.  Other than that, we were happy campers here.

I would recommend to eat dinner here at least once.  I don’t know how much it is now but at the time it was for €37/ person.  It was a four-course meal and each course was served with wine straight from their own winery.  The food was great, the wine perfect for each course, but the thing that makes that experience linger so much in my memory is the company.  My husband and I were lucky to have dinner with three other couples from Germany, Latvia and England.  That dinner lasted for five hours! Everyone just had a great time sharing memories, swapping stories about travels, different cultures and backgrounds that it was past 1am when we finally left the table.

Dinner has to be booked at least a few hours ahead.  They don’t have a  normally operating restaurant so they have to know for how many people they would be cooking dinner for. There are some restaurants about 20 minutes on foot from the place or you can just drive down to the Coop nearby for some food and the much-needed bottled water, though the tap water at the B&B is drinkable.

Tip:  Bring mosquito repellant along with you in Italy in summer.  The mosquitoes there are notorious for eating you alive when given a slight chance.

It was surprising that Siena wasn’t packed and bursting to seams with tourists considering we were there in the highest peak of the holiday season.  There was something laid back about the place and I love that it is highly pedestrianized.  You can take your time walking in the narrow streets without getting dizzy from too many people and vehicles.

As much as I love Prague and its old town square,  I have to admit Siena has my vote in having the most beautiful square in Europe.  The Piazza del Campo sits like a shallow bowl on its medieval glory overlooked by the graceful Torre del Mangia.  I usually avoid squares in Europe like the plague because they are always crowded  with people and pigeons, but I think the best way to soak up the atmosphere of Siena is to sit in this square.  I would sit there for hours if the sun wasn’t too hot. 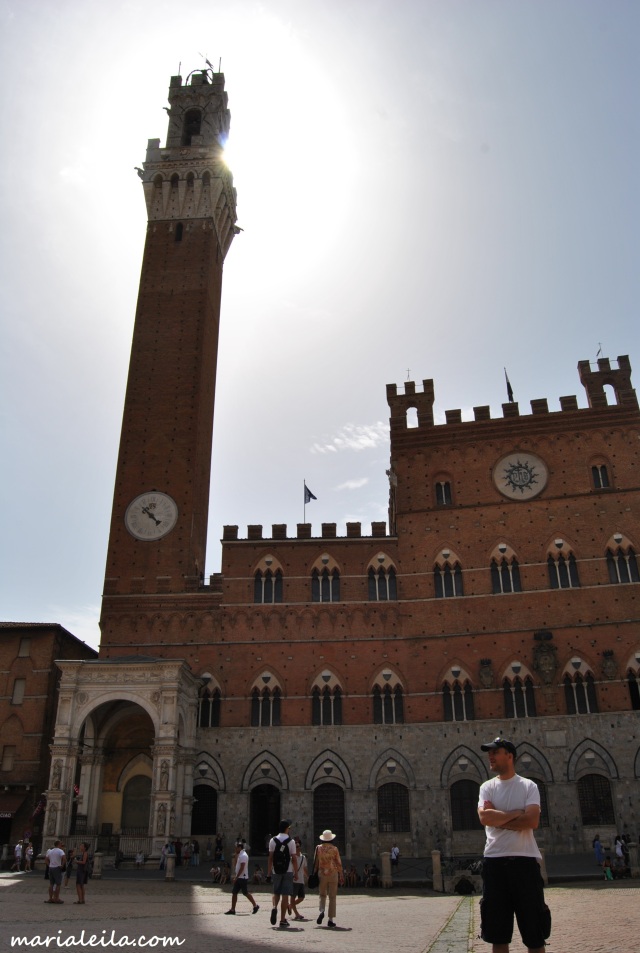 Husband dearest with the graceful Torre del Mangia at the background.

The Duomo is a few narrow streets away from the Campo.  This gothic cathedral has a candy-striped facade.  I guess the interior is probably as striking but we didn’t go in. There was a long queue to get in and with queues we usually just say thanks but no thanks.

For lunch, Valentina from our B&B recommended “Antica Trattoria Papei” which is at Piazza del Mercato just behind Campo.  It took us several minutes to find it because our map wasn’t very detailed, only to find it was closed.  Beats me why it was closed at noontime on a Saturday.  We ended up in the adjacent restaurant pictured below:

Grilled sea foods for my husband, spaghetti fruti di mare for me. Food was good, not extraordinary but I loved the ambience and the price was reasonable.

By mid afternoon we have already wandered  on most streets of Siena.  We left the paintings and exhibits for other tourists to admire because yeah, we’re really not into that. Around this time the heat also left us pretty exhausted so we decided to head back to the pension for a little snooze and another round of shower for me.  Heat and dust are your constant company in Tuscany around this time of the year.

At 6pm we were on the road to Volterra.

Volterra is north-west of Siena and probably got more attention after Stephanie Meyers made it home of the Volturri.  I never liked that saga but research told me Volterra is an interesting stop in Tuscany.

The drive took us about an hour, with two stops to fool around in front of the camera with the picturesque landscape in the background.  Volterra is another walled comune, just like Siena so most likely you need to park outside the walls.  This is when I’d say it’s best to drive around Tuscany on weekends.  Nobody cared when we drove inside and parked right on a side street.

In July, Volterra holds a theater festival.  This we only found out when we were there.  It was quite surreal, arriving at around 7pm to a very quiet town.  Some streets were even empty that we started to wonder what was going on.  Later we heard signs, better yet, sounds of life, through distant drums.  The sound led us to the town square where more surreal scenes were waiting:

Kids laying still on the ground, people with red hands marching towards them to the wild beating of drums when a voice blasted through the speakers in a barrage of Italian and the rest of the crowd (minus the bewildered tourists) raised their hands. Most of them were holding books.

The people were so engrossed it seemed criminal to ask them what was going on.  When it was over, my husband and I walked around the square and found our answer: “Volterra Theater-  Mercutio Does Not Want to Die.”

This answer only led to more questions.  Mercutio from Romeo and Juliet? Why was Volterra holding a festival in his honor? The answer to this folks is – sometimes it doesn’t hurt to do more research about the places you would be visiting.  Though on the flip side, it’s also nice to be surprised when you don’t know what to expect.  I wish I could make up my mind which option is better.

The sun was setting when we headed back to Siena.  I would recommend to drive at least once at sunset to experience how the breathtaking Tuscan scenery gets even more dramatic.

I believe driving around Southern Tuscany, especially around Val d’Orcia, should be on everyone’s bucket list.  It has some of the loveliest countryside in Europe.  The cypress trees lining up along the roads, the umbrella pines dotting up the view of the horizon,  olive trees swaying on rolling hills perched with farmhouses –everything about this part of the world is more beautiful seen and experienced in person.

I’ll be writing a one-day itinerary through this area soon.  I do feel it deserves a separate post.  Meanwhile, here are some photos for you to enjoy: 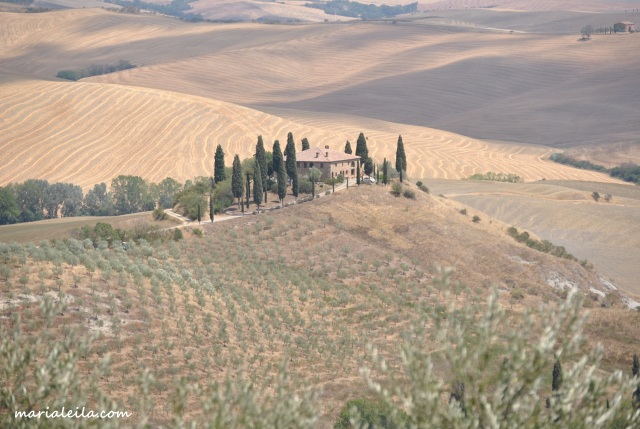 While you have to drive around to enjoy the most of what Tuscany has to offer,  it is advisable to go to Florence from Siena by bus especially if you’re visiting in summer.

The fare costs about €8 one way per person and the ride lasts an hour.  Just remember to take one that says “corse rapide.”  The bus station in Siena is at Piazza Gramsci.  Well, it’s not really a station but a bus stop, but I still think it’s best to go there as this is where most buses originate from.  Return tickets can also be bought there.

The bus/trans station in Florence is in the center, very close to the must-see sights.  This is why I strongly recommend taking the bus instead of driving.  Finding a parking area in a very busy and crowded city can be a major headache.

I think Florence is really beautiful but for some reason it just didn’t give me the feels.  I guess because it was so crowded that whatever magic the city holds just vanished with the multitude of tourists in varying nationalities.  After a couple of hours, all I wanted was to run back to quiet Siena faster than Usain Bolt off the tracks.

If you’re there just for one day, you can walk to the Duomo from the bus station.  If you have the energy to climb it and the patience to queue up for your turn, I think it’s the best place for one to see Florence in all its glory.  When we were there the queue was probably almost half a kilometer long so yeah, no Duomo for us.

The Piazza della Signoria is also close to the Duomo.  You don’t even have to check your map when you’re in Florence, just follow the throng of tourists and it will surely take you somewhere considered a must-see of the city.  Anyway, this piazza has a lot of statues like a copy of  Michaelangelo’s David (the original is housed at the Gallerie dell’Accademia also in Florence) standing at the entrance of Palazzo Vecchio.  Here you can also find other statues like the Fountain of Neptune, Perseus with the head of Medusa,  and so much more.  I could just imagine how different if would be if you come to this square very early in the morning where you could have the place almost to yourself.  Even with the crowd I still did like this part of Florence. 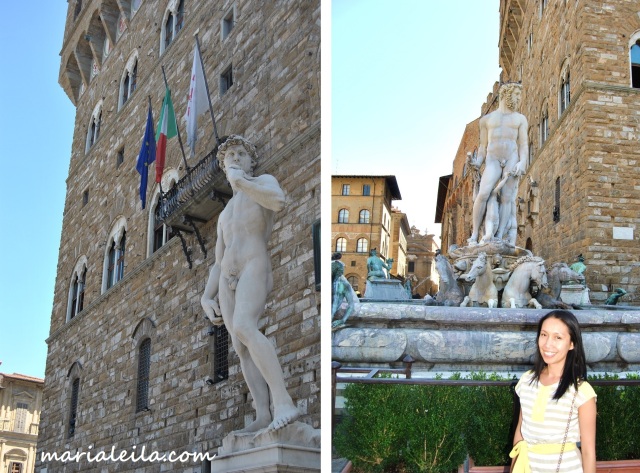 David, the Fountain of Neptune and me sans make up in Florence, Italy.

From Piazza della Signoria we headed to Ponte Vecchio where there are so many jewellery shops built along it.  Then we crossed towards the Palazzo Pitti.   There should be a huge garden behind this palace according to our map  so we walked for several minutes trying to find an entrance, only to find all the entrances locked.  Insert eyeroll here.

From Palazzo Pitti we walked back through Ponte Vecchio heading towards Via Condotta for lunch close to Badia Fiorentina.  From there we just ditched our map and just walked through much less busy streets where we ended by Ponte alla Carraia.  From here you can get a nice perspective of Ponte Vecchio and Ponte Santa Trinita.

If you walk a little further from this bridge through Via del Vigna Nuova, you will end up at Via Tornabouni where the fancy Italian brands have their shops.  It’s a straightforward walk to the bus/train station from there.

I hope you’ll have a great time in Tuscany.  Send me a postcard when you’re there.  Here is mine for you: